Once again the main street of Boonah is decked out in Christmas decor and doesn’t it look charming?

This has been an ongoing project over the last 3 years and has involved many different community groups and individuals who have contributed their amazing talents as well as their valuable time and so we thought we’d share a bit of the backstory as to how the trees and street furniture of Boonah came to be draped in Christmas adornments.

Every year the Boonah Chamber of Commerce form a Christmas Committee in June to start planning Christmas festivities including the street festival. In 2018 one of our Christmas committee members, Janine Gibson, initiated the bunting. This was achieved by involving the community in social work groups at the Story Tree, Picnic Parlour and Carinity.

Last year we decided we would start decorating the trees as well as putting the bunting up. Chamber Members, plus members of the community, started working in January 2019 to wash, repair and make more bunting and to start working on the most prominent trees in High Street. This was aided by an enthusiastic group called the Treble Rebels who made most of the delightful coverings for the rails in Boonah and decorated the tree outside Sandie Lee’s. The Boonah Girl Guides made pom poms and there were women crocheting and knitting from March onwards.

The positive feedback from the community as we were installing in December and the obvious lift in the community spirit during a horrendous time of bushfire and continued drought was inspiring.

In 2020 Chamber Executive members Margaret Fry and Wendy Briner set a target of decorating every tree in High Street and to increase the number of people working on this project by involving community groups. The end result was participation by QCWA, Rotary, Lions, Boonah Visitor Information Centre, U3A Mah-jong Group, Treble Rebels and we were privileged to have Artist Sally Hart offer to decorate the tree in the SRRC forecourt. This work started once again in March with the washing, repairing of existing materials and then an action group for implementing Christmas 2020 in Boonah.

This year our Christmas street and business directory are themed around “Reflections On Fire” base around fire safety and preparedness and community connectedness based on funding we received from the State and Federal Governments.

Reflections on Fire from the community and community groups are currently being placed on the trees.

It is hoped that by decking Boonah out for Christmas we will give our community a lift and bring tourists into the town who will help to support our local community.

Once again, the feedback and appreciation from the community has been overwhelming and we are fortunate that we have had several more volunteers offer to help us in 2021. We are planning to hold monthly workshops for the community so that we can have an opportunity to meet and discuss our progress. Many of our volunteers prefer to work at home and are much appreciated silent contributors. 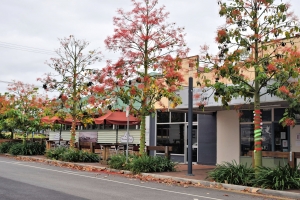 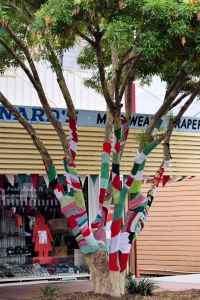